Sold Out
Previous | Next It’s summertime in the northern hemisphere and many members of the hockey community will be heading to the beaches to enjoy some sunshine, sea and sand.

However, proving that hockey is a sport that can be played anywhere, on any flattish surface, beach hockey means that, even when on holiday, hockey players can still get a good practice session.

Beach Hockey is played within communities across the globe. Sometimes it takes the form of an informal get together with hockey-playing friends, sometimes it turns into a serious competition.

While it is easy to call a few friends together and play an informal game on a patch of sand, the KNHB, the national federation of hockey in the Netherlands, has published a set of rules and guidance for people looking to play beach hockey in a more organised and formal setting.

The pitch dimensions are 25 metres (goal ends) by 35 metres (sidelines), slightly wider and longer than one quarter of a regular hockey pitch. In front of each goal is a two metre zone, the equivalent of the circle. The goals themselves are four metres wide and two metres high.

There are also two 10 metre lines on each side of the pitch, measured from the goalie towards the centre. 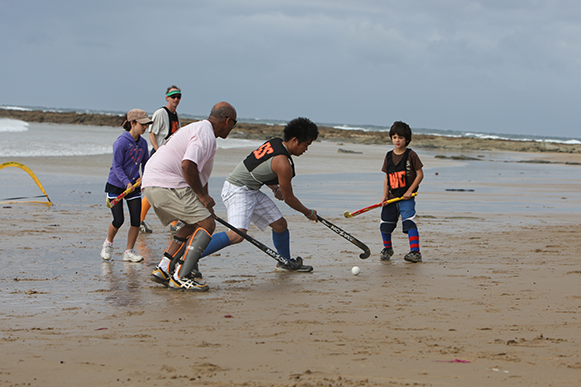 Teams consist of eight players, with a maximum of five players on the field at any one time. One player can be nominated goalkeeper and have goalkeeping privileges, which includes stopping the ball with his or her hands. And players can be substituted at any time except during a penalty corner.

Hockey sticks can either be regular hockey sticks or adapted sticks – these have a larger head and three small holes that allow the sand to pass through. The ball is leather and slightly smaller than a football: it’s size and the fact it is softer than a hockey ball means it can be played in the air as well as along the sand, creating the opportunity to hone some great 3D and aerial skills.

The players play barefooted, but the rules state that a team must be wearing the same coloured tops, with the exception of the goalkeeper.

Goals can be scored from anywhere and the goalkeeper can use his or her feet in the two metre circle.

While Beach Hockey is a fun and informal way to keep up hockey skills while on holiday, many event organisers tap into its popularity to offer side competitors to enhance their main event. At both the 2014 Hockey World Cup in the Hague and the 2017 EuroHockey Championships in Amsterdam, Beach Hockey was a popular activity running alongside the main events. In the Hague, teams got together to compete on a social and ad-hoc basis, while in Amsterdam, competing nations were invited to send a Beach Hockey team to participate in an international competition. 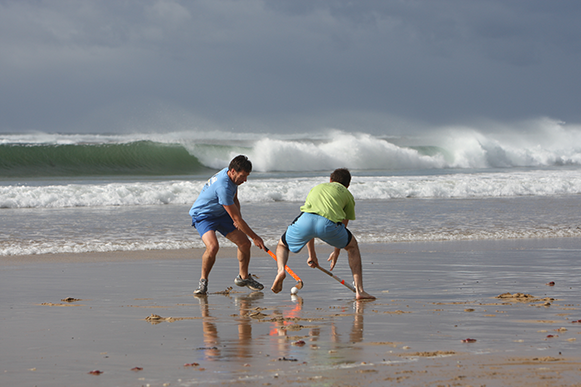 One country where you would expect to find the sport being played is Australia. Long sandy beaches and a strong hockey culture would seem to be the perfect recipe for a tradition of beach hockey but the sport is played in surprisingly few locations: sharks and nudist beaches were both sited as reasons for not holding beach hockey events in the Northern Territory!

However, the sport has been a feature in other areas of Australia. A new beach hockey format is being worked on by the Douglas Hockey Association in Queensland,  while in Tasmania, the activity is used as a promotional tool for main events.

The most active beach hockey-playing area is New South Wales. For eight years, until very recently,  Cape Paterson, near Wongthaggi, was the venue for a thriving beach hockey scene. At one point, says organiser John Hackett, there were 14 teams playing a round robin league. The teams came from far and wide, with players travelling from Melbourne and West Gippsland – more than three hours drive away.

Hackett is hoping to revive the competition with a Beach Hockey Day during the summer, Covid-19 permitting. He says: “Cape Paterson at low tide is broad and long, with hard sand. After each game, we'd just move the pitch markers and little goals further along the beach. When we had 14 teams, we'd have seven games at a time; even at the end of the day, we'd have fresh sand for games. Everyone always enjoyed a body-surf afterwards.”

Proving that the surface is not too important when people want to get together for a game, Hackett also runs a 5-a-side hockey league on a tennis court in Wonthaggi. This has been running for more than 20 years and Hackett says hundreds of players have taken part, with many ‘graduating’ to play premier league and state hockey.