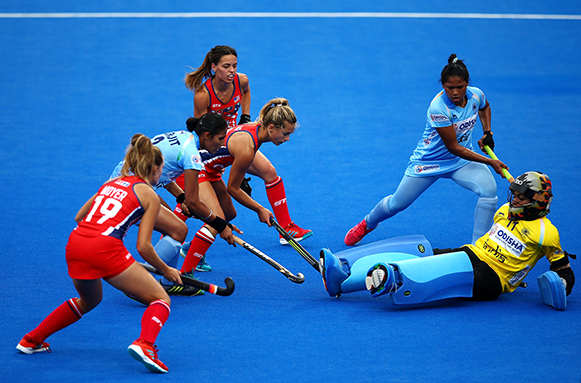 Following an 18-month long qualification process, the line-up for the Olympic Games Tokyo 2020 hockey competitions will be confirmed this weekend as the final three days of the FIH Hockey Olympic qualifiers take place.

With ten teams having already achieved Olympic qualification by winning their respective continental championships, there are now just eight - four men, four women - of the 24 Olympic tickets unassigned, something that will be resolved between Friday 1 and Sunday 3 November 2019.

On Friday, two matches will take place in one of the world’s most impressive hockey arenas. Bhubaneswar’s Kalinga Stadium will see India’s men’s and women’s teams in action, with both hoping for a safe passage to Tokyo 2020. India’s women (FIH World Ranking: 9) face USA (WR:13) in their two-match Olympic qualifier, while India’s men (WR:5) - the eight times Olympic champions - go head-to-head with Russia (WR:22).

Sitting higher in the world rankings and with home advantage, the Indian teams will rightly be regarded as favourites. However, neither team will under-estimate their respective opponents. Since 2016, USA have lost just one of their five encounters against India, with their most recent meeting - at the Vitality Hockey Women’s World Cup London 2018 - finishing 1-1. India’s men thrashed Russia 10-0 at the FIH Men’s Series Finals in Bhubaneswar earlier this year, but the visitors are likely to enter this contest with a completely different mind-set thanks to their silver medal at the EuroHockey Championship II, a performance which earned them promotion into Europe’s top tier event for 2021.

The second legs of the Bhubaneswar Olympic qualifiers take place on Saturday 2 November, a day that will also feature six other crucially important battles. 1976 men’s Olympic gold medalists New Zealand (WR:9) play host to Korea (WR:16), silver medallists at Sydney 2000, in Stratford. The Black Sticks are targeting qualification for a fourth Games in succession, while Korea aim to return to the Olympic arena after missing out on Rio 2016.

Bhubaneswar’s Kalinga Stadium is not the only World Cup venue being put to good use for these Olympic qualifiers. Great Britain’s men and women will be hoping that they can seal Tokyo 2020 qualification at the Lee Valley Hockey & Tennis Centre, the scene of last year’s outstanding Vitality Hockey Women’s World Cup London 2018.

Great Britain men (WR:7) are likely to face a stern test from a revitalised Malaysia (WR:11), while GB women (WR:5), the Rio 2016 Olympic gold medallists, know that they have to be at their best against Chile (WR:18) in order to keep alive hopes of defending their Olympic crown.

Germany’s men and women - Olympic bronze medallists at Rio 2016 - will be in action at Mönchengladbach’s Hockeypark, the place where Die Honamas famously won the FIH Men’s World Cup in 2006. Germany men (WR:6) need to overcome the challenge of next-door neighbours Austria (WR:20) - their conquerers at the FIH Indoor World Cup 2017 in Berlin - if they wish to add a fifth Olympic gold medal to those collected in 1972, 1992, 2008 and 2012.

Germany’s women (WR:4), the Olympic champions of Athens 2004 and 2019 European silver medalists, go head-to-head against an Italy (WR:17) team that is packed with talent and unpredictability. While Germany dominate the historical head-to-heads, a two game test series in 2018 finished with one win apiece, suggesting that this clash may not stick to the script.

Saturday’s final match is a battle between 2018 World Cup silver medallists Ireland (WR:8) and Canada (WR:15), a team that reached the final of the Pan American Games in Lima, Peru earlier this year. Ireland’s women are chasing Olympic qualification for the first time in their history, while Canada have not participated at an Olympiad since Barcelona 1992, where they finished seventh. With Canada men having edged past Ireland in Vancouver last weekend, the Green Army will be determined to do the business at Dublin’s Energia Park, the 6000 capacity rugby stadium being re-purposed for hockey thanks to the latest advances in Portable Pitch Technology. For more details on that story, click here.

With six second legs all taking place, Sunday is likely to feature various twists and turns in what is the last chance to secure a place at the Olympic Games Tokyo 2020. It promises to be a thrilling weekend of world class international hockey.

You can follow all the action as it unfolds via our live reporting service on the FIH website. Also, every match will be available on FIH.live in all territories where there is no broadcasting agreement in place. For a complete list of broadcasters, please click here.

How Olympic qualification works:The winners will be determined as follows: teams will be ranked according to the number of points each has accumulated in both matches (for each match, 3 points are awarded to the winner, 1 point to each team in the event of a draw and 0 point to the loser). If there is equality among the two teams, then the teams will be ranked according to their respective goal difference. If the equality remains, a shoot-out competition will be played to establish the winner.